Since the 1870’s crokinole players, especially in rural communities, have gathered around kitchen tables for evening fun. Crokinole, a popular social activity for the entire family, encouraged co-operation as players made suggestions on various possible moves. People realized that unlike some activities such as card games, which were associated with gambling, crokinole was a clean game suitable for family enjoyment. 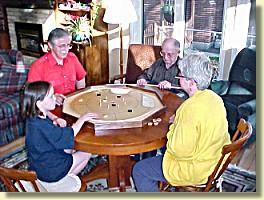 This game, relatively unchanged since the 1870’s, continues to provide enjoyment for all seasons and all ages. For one family in the heart of Mennonite country in south-central Ontario, crokinole has become an integral part of their roots. In 1970 Manasseh Martin first began crafting circular crokinole boards one at a time. These boards provided many wholesome hours of camaraderie and competition for his family and friends. Manasseh’s boards became very popular and soon this hobby was far-reaching. At the age of 83 Manasseh, upon retirement, encouraged his son to continue the craft.

Willard worked with his father for 3 years (1990 to 1993) learning the finer points of making a good, high quality crokinole board. In 1993 when Manasseh retired, Willard began the crokinole game board manufacturing on his own as his Dad had taught him. Willard worked on creating a crokinole board with professional features and has been making the WILLARD brand since 1997. Four Generations of Crokinole Players
Four generations of Martins playing crokinole.
Clockwise from top: Manasseh, granddaughter Heather, great granddaughter Victoria, and son Willard
Living Room with Crokinole Board With an ever increasing demand for WILLARD crokinole boards the idea of inviting Mannaseh’s youngest son (Willard’s brother ) Bruce to help out and be a partner in the crokinole board business that there father had started in 1970 became a reality. Bruce in the spring of 2012 started working in the crokinole board shop and is learning the trade as Willard had 23 years before.

Today Manasseh’s 2 sons, Willard & Bruce continue this family tradition of crafting crokinole boards. Willard & Bruce offer circular and octagonal boards as well as accessories. The trademark “WILLARD” boards have been sold and shipped to many countries around the world, providing countless hours of enjoyment. “WILLARD” boards have also been used at numerous crokinole competitions, including the annual World Crokinole Championships.

Here is your opportunity to purchase 2nd generation Martin tradition.